A one-piece outfit composed of a white jacket that has pale blue ornate designs mid-arm and split bottom, lined in silver with a beaded chain attached to a crescent, residing over a glittery blue gradient bell sleeve. The bottom has a blue band with silver border and a print of white curled lines and flowers, and a trim of three, white ruffled layers of fabric lined in light blue. The torso is lined in silver with two chains held by loops at the middle, over a glittery blue gradient band with a white ornate heart design on it. On the corner is a crystal heart with two silver beaded chains attached to a pale blue and silver clock ornament on the left corner of the chest. The middle section is lined by white ruffles, and print around the bottom is a pale blue ombre and pattern of midnight blue castles. The tails inner coloring is a glittery blue gradient with purple ombre and silver lining. The lapel is a white and light blue diamond tile, and on the neck is a frilly collar lined in light blue with a silver choker and gem hanging from it, residing over scalloped white fabric with a light blue ombre. White tight pants are included with a silver and dark blue crown charm and a single azure button at the middle. A navy gradient band goes down each leg with light blue ruffled border and a silver vine and snowflake pattern. The cuff is light blue.

Blue gradient glittery boots with a white toe and crystal gem sole with thin wedge heel. A milk blue gradient band goes up the middle with a silver border and white ribbon wrapped over it. The cuff is lined in silver with a loose white and blue ribbon hanging from the middle, adorned by a pale blue and silver clock.

A glittery blue gradient crown with silver frame over it and an ornate band around the bottom with a pair of clock hands sticking up. At the middle is a blue gem on an ornate base. 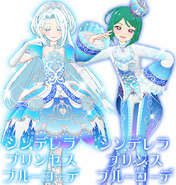 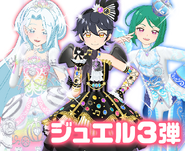 Retrieved from "https://prichan.fandom.com/wiki/Cinderella_Prince_Blue_Coord?oldid=38666"
Community content is available under CC-BY-SA unless otherwise noted.