The Kiratto Jewel is a jewel-like item that can be inserted into the Jewel Pact or the Design Palette.

A Kiratto Jewel is a small gem ornamental piece attached to a metallic or solid colored base. Each possesses coloring based on its owner and has wings on it.

A big heart-shaped gem with a gold heart border over it lined by scallops and pearls. At the middle is a gold star with a diamond beneath it, and on top is a gold heart on a bow with a small gem at the center and various pieces on top. Behind the top is a pair of wings, followed by a smaller pair at the middle. The gems and wings are colored to match its user: hot pink for Mirai, yellow for Emo, and light blue for Rinka.

A large gem in the shape of a star on a gold base lined by pearls. At the center is a gold ornament with four diamonds beneath it connected at the center, two hearts on top, and a big diamond adorned by a gem at the middle. On the back is a big, spread out pair of stylized wings. The star and wings are colored to match the user, while the gem on the diamond is slightly darker: Anna's is pale pink-red, Sara's is emerald, and Mel has violet.

A big oval-shaped gem on a metallic, pastel colored base lined by pearls and surrounded by decor on both the top and bottom with a shape at the center adorned by a gem to match the oval. At the middle is a decorative shape on the top and bottom of a heart, and at the bottom is a wing with an ornament on the side. Maria's gems are gold to match her angel wing, which faces the left and is connected to a heart, while the frame is peach with a scalloped and dot pattern that has hearts etched on them, and the heart at the middle has curling shapes surrounding it. Suzu's gems are silver and her base is purple. The wing is bat shaped and faces the right with a six-point star next to it, matching those decorating the top. Attached to the heart are diamonds.

Anju's gem is spherical pale blue. The frame is silver with a pattern of diamonds and pearls, and the bottom is shaped to resemble a crowned swan facing the left wigh a single wing that has a pale blue gem at the base. At the middle is a droplet shape with dots and diamonds on both the top and bottom.

A rainbow gradient rounded gem on a matching round base. Close to the gem is a pearl chain and at the center is a silver diamond with a dot at each tip, and on top is a silver crown. At the bottom is a silver ornate piece adorned by a rainbow gem, connected to a pair of rainbow angel wings with a tinier pair at the middle.

The Kiratto Jewel indicates when an idol or a group can perform. When it glows, the idol inserts their jewel into their Jewel Pact, activating the coord change sequence. 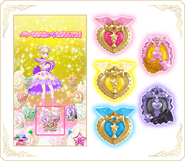 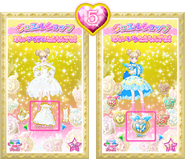 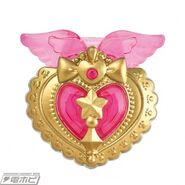 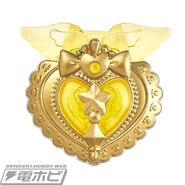 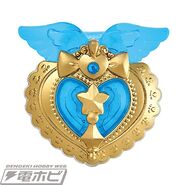 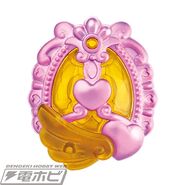 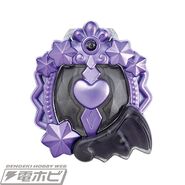 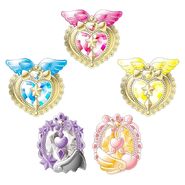 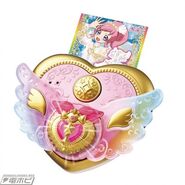 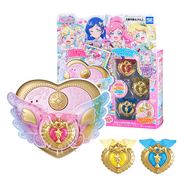 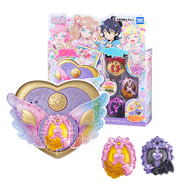 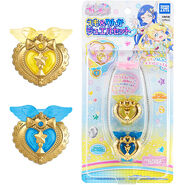 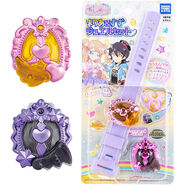 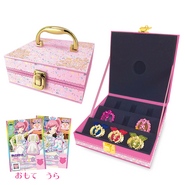 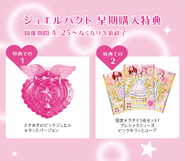 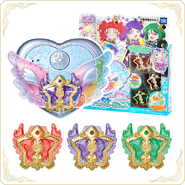 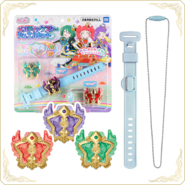 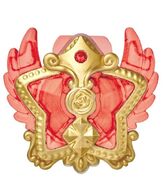 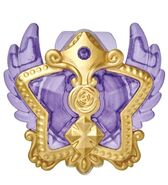 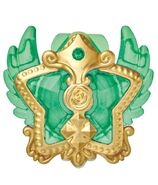 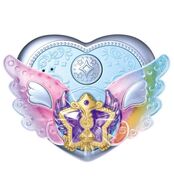 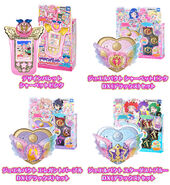 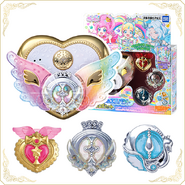 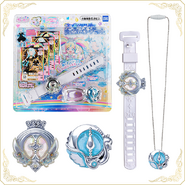 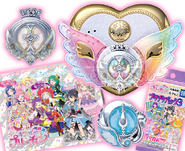 Add a photo to this gallery
Retrieved from "https://prichan.fandom.com/wiki/Kiratto_Jewel?oldid=53727"
Community content is available under CC-BY-SA unless otherwise noted.